THE GENERAL CARL A. SPAATZ AWARD is Civil Air Patrol’s highest cadet honor. It is presented to cadets who have demonstrated excellence in leadership, character, fitness, and aerospace education.

Cadets qualify for this prestigious award after devoting an average of five years to progress through sixteen achievements in the CAP Cadet Program. Along the way they develop self-discipline, a strong sense of personal responsibility, the ability to lead and persuade, and the foundation necessary for pursuing a career in aviation, space, or technology.

The final step a cadet must complete to earn the Spaatz Award is a rigorous four-part exam consisting of a challenging physical fitness test, an essay exam testing their moral reasoning, a comprehensive written exam on leadership, and a comprehensive written exam on aerospace education. Upon passing the Spaatz Award exams, the cadet is promoted to the grade of cadet colonel.

The Spaatz Award is named in honor of Carl “Tooey” Spaatz, the first Chief of Staff of the United States Air Force. One of the giants in the history of airpower, in 1929 Spaatz, together with another pilot, set an important flight endurance record of 150 hours and 40 minutes in the early days of aviation. During World War II, he commanded the Allied air campaign against the Nazis. In the Pacific Theater, the atomic bombing of Hiroshima and Nagasaki took place under his command. After retiring from the Air Force, General Spaatz served as the first chairman of the Civil Air Patrol National Board.

On average, only two cadets in one thousand earn the Spaatz Award

Spaatz Cadets are expected to serve as role models for junior cadets, and become leaders in their communities as they enter adulthood. The first recipient of the Spaatz Award, Michigan’s Douglas C. Roach, became a pilot with the Air Force Thunderbirds. 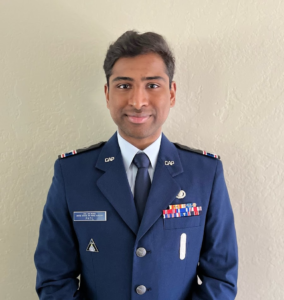 C/Col Patil has been active in CAP since August 2017, when he first joined out of interest in flight and emergency services. Since then, he has staffed a variety of events, including ATS’s, NCOS’s, Encampments, and CAWG AESA, at the squadron commander level and higher. Locally, he served as the commander of his home squadron, Jon E. Kramer Composite Squadron 10, from August 2020 to August 2021. Two months after he joined program, he first got involved in Emergency Services and has since received qualifications for Ground Team, Urban Direction Finding, Mission Radio Operator, Mission Staff Assistant, and began training for sUAS Technician and Mission Pilot. He was also the California Wing Cadet of the Year for 2020 and is the recipient of three Commander’s Commendation awards for accomplishments such as organizing CAWG’s Emergency Services academy in January 2021.
Outside of CAP, C/Col Patil is currently a rising sophomore at the Georgia Institute of Technology studying Computer Science with a minor in Robotics. Throughout high school, he was involved in organizations such as FRC, where he led his high-school team as their Director of Mechanical Engineering. Currently, he is involved in multiple student organizations on campus, including Georgia Tech’s Yellow Jacket Space Program which aims to launch a liquid-fueled rocket into space. This summer, he will be interning at Ansys in Philadelphia under a software development position, where he will work on developing spacecraft orbital determination software. 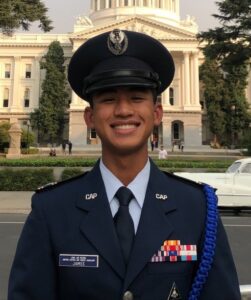 C/Col James joined the Civil Air Patrol in 2017 at the age of 12 and achieved this award just prior to his 16th birthday in September. During his time in the program, he has been a member of Fullerton Composite Squadron 56. In addition to serving at all levels of squadron staff, he has graduated and staffed numerous ILPs, with his most notable experience being at Cadet Officers’ Basic Course in 2019. During the pandemic, he continued his participation as the Deputy Commander of the first Virtual BCS and Curriculum Officer of the first Virtual NCOS. He attended his student Encampment in 2018, was the Juliet Flight Sergeant in 2019, and was recently the 149th CTS Commander at the 2021 CAWG Encampment. Currently, he serves as the Pacific Region CAC Chair and National CAC representative.

C/Col James has participated in the CyberPatriot program since he joined CAP, and is currently the team captain after winning third place overall nationally and winning first place in the Cisco Challenge. Outside of CAP,  C/Col James is a junior in the Troy Tech program at Troy High School with a 4.8 GPA and is working towards bilingual proficiency in Spanish. Additionally, he holds his Cisco Certified Networking Associate certification. However, his greatest honor has been having the opportunity to lead the cadets and leaders of the future, and he looks forward to seeing them succeed in all areas of life. 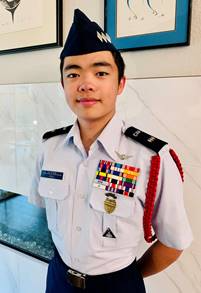 C/Col Maa discovered CAP through airshows at a very young age and as soon as he turned the age of 12 in 2015 he joined Jon E. Kramer Composite Squadron 10 in Palo Alto and has served there his entire CAP career. During C/Col Maa’s CAP career, he served at all levels of squadron staff and attended and staffed multiple wing and region events, most recently as a student at the first PCR Virtual RCLS and as the Cadet Commander of the first Virtual DCS. He also attended his first NCSA this summer, graduating from the SWR Powered NFA, earning his solo wings. C/Col Maa currently serves as the Group 2 Cadet Advisory Council Chairman and Representative to the CAWG CAC.

Outside of CAP, C/Col Maa has rowed competitively for 5 years and hopes to continue in college. During that time, he won a gold medal at the US Rowing Southwest Regional Youth Championships and had the privilege to attend and compete at the US Rowing Under 17 National Championships in Camden, New Jersey. He also frequently travels to South Africa to perform volunteer service, most recently helping to refurbish a rural school. While he used to play music competitively, even taking home 2nd place at the US Open Music Competition, he is now simply an enthusiast who plays and listens casually for fun and enjoyment.

Congratulations C/Col Maa, we are all proud of you! 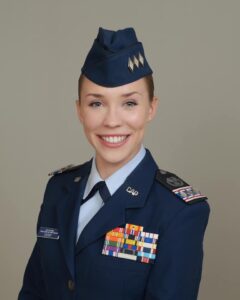 SM Rebecca Cherry has been a member of Civil Air Patrol since 2014 and was very active in the cadet program as a cadet. Upon joining the Minnesota Wing in 2014, SM Cherry attended her basic year of encampment in Oregon, in addition to virtually every CAP activity that she could. She transferred to California Wing, South San Diego Cadet Squadron 201 in June of 2015 and went on to complete 9 encampments. In 2014 SM Cherry served on California Wing’s mess cadre, logistics in 2015 and flight sergeant in 2016. In 2017 she attended Nevada Wing’s Encampment as the 17th CTS Commander.

In 2020 SM Cherry commanded the first Super ILP. Shortly after that she accepted appointment to be the 2020-2021 Cadet Training Group Commander. While a global pandemic ultimately resulted in the cancelation of encampment last year, SM Cherry and her team worked diligently making preparations for the 2020 encampment employing the utility of the virtual environment.

Outside of Civil Air Patrol, Rebecca is a member of Job’s Daughters International and a four-time Past Honored Queen (PHQ). She has been a member of the University of Oregon Marching Band Color Guard the past four years and has performed in the Red Box Bowl, Las Vegas Bowl, and last year performed in the Rose Bowl and Rose Parade. Rebecca will be graduating in two weeks from the University of Oregon with a Bachelor’s of Science in Environmental Science, and a minor in Geology. She is on the Dean’s list, and a member of National Honor Society. This fall she will begin a graduate program through the University of North Dakota to obtain a Masters of Environmental Management in Earth Science Systems and Policy.

Congratulations to SM Cherry, we are all proud of you! 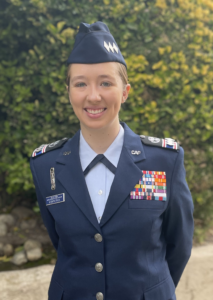 SM  Kirkpatrick is currently enrolled in her third year at the University of Wisconsin, Madison, where she is studying mechanical engineering and serves as a TEAM Lab student technician and woodworking instructor. She is also a braking system team member for UW-Madison’s SAE Formula chassis team, where she works on a variety of fabrication projects for the production of the team’s formula car. Most recently, SM Kirkpatrick earned a Textron Aviation Process Engineering internship, where she completed blueprint and sheet metal training, updated floor-plans using AutoCAD, assisted the tooling and jig shop by welding and adjusting a new jig and performing tolerance checks on the old ‘50s era jig. During this internship, she assisted in Cessna’s 206 and 182 fuselage redesign by laying down jigs for both airframes.

SM Kirkpatrick serves as a role-model for others who choose to pursue a STEM related career. She can be seen in a video called “Becoming a Civil Air Patrol [CAP] Intern at Textron Aviation.” https://www.youtube.com/embed/-bO0dv2dQwc.

Congratulations SM Kirkpatrick, we are all proud of you! 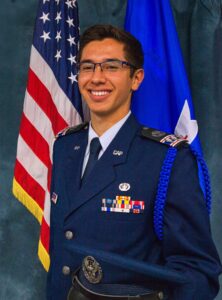 C/Col Luca Hoang joined the Civil Air Patrol in 2017 at the age of fourteen and has stayed with San Diego Cadet Squadron 144 all his cadet career. Since then, he’s attended and graduated from multiple ILPs, and was a graduate of COBC 2019-20, ranking 9th amongst his peers. He has served numerous positions at his squadron, ILPs, and events, most recently as the Deputy Commander for Support for VAESA 2020 and the Cadet Commander for VBCS in September 2020. He’s currently the CAWG CAC Vice-Chairman, the Cadet Deputy for sUAS, and the CAWG 2021 Summer Encampment CTG Deputy for Operations.
Outside of Civil Air Patrol, C/Col Hoang is the oldest of three sons, a Navy brat, a year-round swimmer, a swing dancing enthusiast, and a FAA certified Remote Pilot. He has worked for the YMCA of San Diego for 2 years as a lifeguard and now as a certified swim instructor. He is also a former Toastmaster and recipient of the Competent Communicator Award. C/Col Hoang will be attending John Paul the Great Catholic University in the fall and will graduate in 2024 with a bachelor’s degree in Business with an emphasis in Creative Entrepreneurship. He hopes to start his own commercial drone business but is also considering the Catholic seminary as a vocation.
Congratulations C/Col Hoang, you make us all proud!